I spend an inordinate amount of time wondering what the next 80s hair will be.

I suppose an “inordinate amount” of time on that particular subject would mean that I spend five seconds a day on it, because it’s not something anybody should spend any time thinking about.  I mean, it’s a pretty good use of my time, but only because I’ll do just about anything to avoid having to do actual work.

Isn’t it the most fun to look through old photos from the 80s and say, “I can’t believe everyone teased up their bangs like that!  What were we thinking?!”

We all thought it looked awesome at the time – the bigger the hair, the better!  Nobody ever thought big hair would fall out of fashion, but of course it did.  It’s fashion.  That’s the nature of it.

The 80s hair of the 90s, of course, was the Rachel haircut, the cropped denim vest over the prairie dress, and lug-sole pumps worn with anything.  It was a sassy look if you wanted to look like the mom on Beverly Hills 90210, or Brenda on 90210.  Or Donna.  Or literally any woman on 90210 except for Emily Valentine, who was my personal style icon on that show.

The 2000s brought us 80s hair in the form of the stupid “trucker hat” that I wanted to knock off of the head of every person I saw wearing one, and lip “plumpers” that felt like someone sprayed pepper spray on your lips, but it was worth it, because then you looked like someone punched you in the mouth, and women’s dating books will tell you that men find “vulnerability” highly desirable in women, and what could look more vulnerable than having recently been punched in the mouth?  Also, by “men”, I mean “gross men”.

The 2010s have brought us “contouring”, where you spend a ton of money on various face powders to make your face look like a cross between Max Headroom and the giant ball thing at Epcot.  That still seems to be a thing, but I feel like its popularity is waning now that people are realizing that faces should look more like a human and less like the computer-animated guys in the Dire Straits “Money For Nothing” video.

I realize this may be an unpopular opinion, and please feel free to disagree with me because, honestly, who really cares, but I believe women’s current eyebrow fashions are today’s 80s hair.

They’re scaring the crap out of me.  Why are they so…harsh?

And the more “skilled” the applier, the more harsh the eyebrows become.  Any time someone shows me wedding photos or bachelorette party photos where they had a makeup artist do everyone’s makeup, I have to restrain myself from physically recoiling, yelling, “Shit!” and then driving my car into the ocean.

Granted, as a fair-haired type, I have what can best be described as “no-brows” or “ghost-brows” that I have to fortify with tinted eyebrow gel just so they’ll be semi-visible and I won’t be mistaken for Bob Geldof when he cut his eyebrows off in Pink Floyd’s “The Wall” (which I was forced to sit through by my 25-year-old boyfriend when I was 16 and I HATED EVERY SECOND OF IT because it was SO BORING).

Pro Tip:  If you want to entertain your Lolita girlfriend, don’t make her watch your boring, weird, dewd movies that are only suitable for druggies who were alive during the Johnson administration.  What you should do, is make her watch the police take you to jail because you’re a pervert and a criminal because oh my god why are you dating a 16-year-old.

That would have been far, far more satisfying than watching Bob Geldof take off those eyebrows in “The Wall”.

I swear, any time I walk around the makeup store these days, everyone there looks like this:

I mean, if you naturally have thick, caterpillar-like, squared-off eyebrows and are happy with it, more power to you.  Frida Kahlo it up.  Rock that shit.  But when you’re going out of your way and spending hundreds of dollars on products with names like “BoyBrow” and having eyebrow hairs glued to your face to look like Captain Caveman on a testosterone replacement regimen, that’s where you lose me.

And one day, mark my words, you will look back at those eyebrows in photos and say, “What the hell were we thinking?!”

If you disagree, please write your dissenting argument down on a piece of paper, seal it in a jar, and then bury the jar in your backyard as a time capsule.  When you dig it up in twenty years, you’ll be like, “Maggie was right.  100% right.  If only she were alive to see it and hadn’t been shot and killed by Donny Osmond’s personal security team in 2030.”

Have you met me? 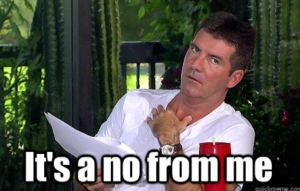